skip to main | skip to sidebar

The New Reality of Personal Development

Personalized Development, as we have always known it, is being revamped, morphed, into new online realities. Training departments have ceased to exist as the new reality is online learning. If an internal course requires quick internal learning, a staff member is selected to produce a PowerPoint lesson, quickly, and spend a couple of off hours to present it.

In the educational world, routine, online, personal development is required by both the state and many school districts. The business world now focuses on re-skill and up-skill learning.  Advanced training becomes the new workforce status requirement, as there is a large shortage of technical workers who can successfully follow procedures quickly and accurately. New information must be imparted, but how? And, if created, will there be enough gained subject matter retention to make training time practical and worthwhile?

Many companies and schools can not incorporate new learning applications during assigned work hours, as there is already highly scheduled job responsibilities.

Yet, new online applications must be instilled quickly to create the much needed, proficient workforce. Not to mention that eager course sign-ups following a days’ work, may be hard to come by. Subsequently, an employee must see additional personal benefits for the extra time involvement.

Some work employees or school teachers can elect to take up-skilling training during personal breaks, if the app fits into the allocated break time framework.

Okay, how will this much-needed learning practice come about? Several factors must be in place:

- The applicant must determine long, lasting personal benefits, at low, or no personal cost

-  Online training must be fast, easy, and in short time blocks

-  No guidebook, manuals, or homework should be necessary

-  Improvement is recognizable to the participant and team members

-  The new process app can be added to existing dashboards

And finally, any new product must have a data-backed success rate to ensure the trainee that the process is worth the time involvement spent.

Posted by Jan Kuyper Erland at 4:32 PM No comments:

No Magic Bullet or Quick Fix:

Summative Observations of a Data-Driven Framework:

Continuous anecdotal data science applications created some interesting observations. With perplexing longitudinal results with all ages showing gains of various cognitive functioning levels, I began to investigate these differences between individuals and yet, the results had mysteriously maintained not only post years latently through diagnostic follow up assessments, but maintained for decades, as evidenced by continuing circumstantial reports of impressive, continuing high career status.

Yet, these data phenomena, under certain application-environmental provisions, would be routinely expected.

Many of the following factors are routinely studied post treatment and verified by cognitive scientists, and should be under continued review at this juncture.

Both performance and mental attitude changed positively for many, not only during the course, but following due, most in all probability, to neuronal rapid, continued flexibility.

Results showed steady growth with all learning levels, but varied among individual subjects.

Average profiles varied in the outcome results. Some appeared to be suddenly “popped to the very high levels”, while others waxed according to their current brain’s proficiency wiring reflecting daily mental habits.

As my master thesis indicated; puppets had the same “star” modeling influence power as did peer- team mates.[i]

Long term memory transfer bridging to critical thought was the most difficult to improve, and required more intense, continuing working memory practice and, with reading and higher order thinking.

Results maintained when eagerly adopted and accepted by the client through the modeling routines.

Peer team models are the important factor for not only overall program acceptance, but for rehearsal spoken timing and pacing.

The deep phonological rehearsal verbal training may have affected the generalization outcomes reported in the research and published higher reading and math scores. [ii]

Subsequently, the reader must have a fundamental understanding, at the contextual level, for comprehending rigorous texts. To meet the top criteria of the Hierarchy of Thinking Model’s Critical Thought, [iii] this layer must be in place.

My earlier blog articles described my innovative, rapid learning process beginning as a parent wishing to give my own family members a learning edge for high cognitive, thought levels.

The initial training was based on my master’s manuscript, “Following Oral Directions with Peers and Puppets” [2] that applied Bandura’s Social Learning Theory [3] and role models. Findings showed no significant difference between either peers or puppets as role models with junior high students with challenging conditions.

This scientific model update becomes thought-provoking research to any reader, as experimental psychology may apply multiple scientific models each uniquely arranged with the cognitive scientists’ viewpoint on brain activation functions and how they are applied.

Rarely is an independent, experimental cognitive researcher also a school teacher, educational content developer, and dramatic artist, creating a scalable model with five generations of research and development pointing to a viable solution.

This investigator applied years of an unfamiliar treatment in multiple environments, with various age group samples, within several geographical areas, with four longitudinal data reports over an extended generational time span. Many 3rd party reviewers and independent testing companies were involved, and the longitudinal experimental trials were with the same intact treatment groupings, randomly applied with control groups, ultimately received an international award. [6]

The Hierarchy of Thinking model was rigorously adhered to within actual practice by focusing on initial chunking rote memorization for patterned details, leading upwards to integrating multiple relationships of sequencing procedural information, then directed to Abstract Problem Solving – Critical thought. [7] 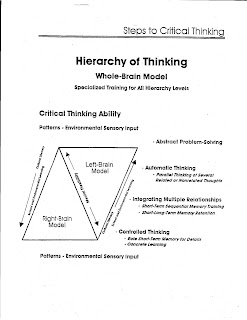 Posted by Jan Kuyper Erland at 4:30 PM No comments:

This article continues a series regarding the importance of procedural learning through cognitive training, and how an incubated, research program became functionally realized.

I previously discussed how images and impressions overcome our day with multitudes of imprints that cloud our auditory processing capability, necessary for adept procedural learning.

Subsequently, in our new current world view, we remain locked into personal cell phone images, unable to remain focused on critically needed listening intentions for any length of time.

In my former article on “Impressionable Speaking Images”, I commented that I, personally, carefully evaluated written and spoken directive steps, both internally and externally, though various data analysis methods.

Personally, experiencing enhanced cognitive visual timing feedback, this process would assist the overall goal of syncing visual perception and auditory sequencing capability with the participants. If a viewer sees repeated spatial faces and voices in a timing motion, there are usually positive cognitive outcomes. [1]

It became obvious that I had to replicate myself through carefully filmed, timed, lessons, comprised of over 600 interlocking visual/auditory segments, so others could be taught with the same, identical system. Specified age groups would eventually encompass test- trial niches.

This restructuring cognitive system was never designed originally, as a prototype product. It was, somewhat, a method to improve my own family’s cognitive processing abilities, with a more procedural mind infusion intent. And, subsequently, this objective became realized some time ago.

Remarkably, it now continues realized, indirectly expanded exponentially, through all the activated participants with their own endeavors. Hundreds, even thousands, have experienced better lives found in other unique ways through different avenues.

It has been repeatedly applied through the retro-synthesis threads, the intensive training each training participants received, by following sequential procedures, coding, quickly. Consequently, their procedural management expertise continues to build, almost on a daily basis, helping thousands of individuals, through each of their own individual career objectives; many of whom, operate on very high national levels.

It is not often that an art/science accelerative method becomes incubated for decades, waiting for not only the essential technology to become available, but also attain the right studio and photographer filming requirements that was essential for creating dramatic image/sound looping action.[2]

Yet, the artistic/scientific under-pinnings became a nagging, daunting quest, as the filming should be completed with me as the primary engineer, script designer. And, how, when, and who would be involved with the required pre-production staging, film it, and then conduct the ongoing post-production sound-visual editing requirements?

As key decision maker, I eventually found and trained the essential photographer, personally recommended, and eagerly available to moonlight his day job. He was tightly bookended with a demanding work-family schedule that interfaced with my own long, search time- table. Like all learners, the photographer and I had to operate at our own pace, work with overly limited, available time slots, creating multiple, ongoing, insightful revisions, to realize any sort of valued outcome.

With a wide variety of teaching, in different states and school districts, I found my creative abilities non-applicable with many school teaching models. Thereby, it became pertinent to create a viable research and development establishment. The entire family was the basis, and stood to benefit with this decision.

Their profile ranges intrigued me, including my own.  Even-scored, flat profiles can be readily apparent, as are low-deficit, average, and low average summaries; but they did not exist here. In our case, estimations inter-played with average, high-average, to gifted profiles between family members.

It was “the obvious cognitive, black, holes” that I started to wonder about. Subsequently, those cognitive calculations served as both a baseline and barometer, for my continuing assessment profiles and instructional lesson’ designing.

An unusual, alternative, learning intervention method was emerging quite by happenstance. The process demanded strong data analytic solutions, as it could not really be called a specific program, as the improvement lessons had to be created from scratch. I had used spelling words, word usage, as a school learning disability teacher, occasionally with simple hand puppets, even with junior high ages.

To begin at the starting point, an instructor must determine who is available to teach, at what instructional level and what will the material consist of, for a specific objective. Some professorial friends had instigated and pressed this endeavor, as they insisted that I help their high school-age son, as a certified learning disability teacher. I now found myself teaching in a home studio with my own kids, with the additional requested student.

These , vocal-action puppets that had been part of a family touring, comic, puppet show in the 1970s; were now happily instructing learners of all ages, with cognitive instruction.

Imaginatively creative, and scientifically well- versed in clinical assessment and methodology, I planned sequencing items on the spot spontaneously-continuously, monitoring it internally-mentally/externally, primed with data analysis.

Technically, it was soon becoming rigorous cognitive skills testing and training for many people in a wide range of abilities, utilized as research subjects at multiple test sites, in different geographical locales.

The rest of the story is history, as these technological restrictions have now been addressed.

Abstract: An important issue for understanding visual perception in autism concerns whether individuals with this neurodevelopmental disorder possess an advantage in processing local visual information, and if so, what is the nature of this advantage. Perception of movement speed is a visual process that relies on computation of local spatiotemporal signals but requires the comparison of information from more than a single spatial location or temporal point. This study examined speed discrimination in adolescents (ages 13–18 years old) with autism spectrum disorders (ASD). Compared to healthy controls (n=17), individuals with ASD (n=19) showed similarly precise speed discrimination when two comparison motion stimuli (random dot patterns) were presented closely in time (0.5s). With a longer temporal interval (3s) between the motion stimuli, individuals with ASD outperformed healthy controls on speed discrimination. On a second task—global motion perception—in which individuals were asked to detect coherent motion, individuals with ASD exhibited slightly degraded performance levels. The observed temporally selective enhancement in speed discrimination indicates that a local processing advantage in autism develops over a longer temporal range and is not limited to the spatial domain. These results suggest a dynamic perceptual mechanism for understanding, and therapeutically addressing, atypical visual processing in this group.

Posted by Jan Kuyper Erland at 2:28 PM No comments: